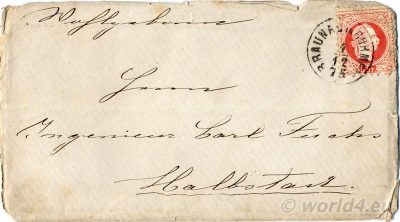 The letter was sent from Braunau, in Bohemia, to Halbstadt in the Ukraine (Ukr. Молочанськ; russ. Молочанск). On the envelope an old rare stamp stamp. The font is Old German, and has the appearance of Caligraphy. In Halbstadt there was a German colony.
The stationery and envelope is decorated with an initial, a large K. The Recipient was an engineer named Karl Fuchs (Charles Fox).
Halbstadt was founded by Mennonites in 1800. Mennonites are a Protestant Free Church, which goes on the Anabaptists of the Reformation movement back.
At the end of World War II, the German population was expelled by the Red Army and exiled to Siberia, Kazakhstan.