Home » Advertisement » A COLT ADVERTISING SHEET OF ABOUT 1850. 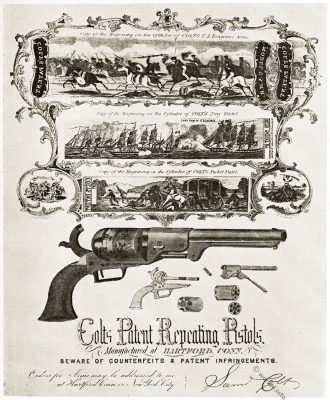 A COLT ADVERTISING SHEET OF ABOUT 1850.

A COLT ADVERTISING SHEET OF ABOUT 1850.

IT MIGHT be of interest to our readers to know how we happened to run across the sidelight on the old stagecoach days, portrayed on the opposite page.
In November of 1952 a news item in the Boston Globe about a burglary in a suburb of Boston reported that the only article missing was an antique Colt revolver. There was nothing particularly unusual about that, but we were then working on the first volume of Taverns and Stagecoaches of New England, and when the description further mentioned that the imprint of a stagecoach appeared on the stolen firearm we thought it merited investigation. It turned out that the revolver was never recovered, but the victim of the robbery informed us that the Boston Police Department, in trying to identify the lost article, had shown him a similar one, so he was sure we would find one at Police Headquarters.

Through the courtesy of Police Commissioner, Colonel Thomas F. Sullivan, we found that in the early 1850’s Samuel Colt had issued an advertising sheet illustrating this type of revolver which he manufactured in Hartford, Connecticut. Correspondence with Colt’s Manufacturing Company revealed that there was a fine copy of this advertising sheet in their extensive museum, and a photograph of it was provided us for use here.

This seemed more effective than trying to photograph the decoration on the revolver itself. Mr. D. W. Hayward, Secretary of Colt’s Manufacturing Company, called our attention to the fact that the engraving on the Navy Model – which was also used by the Army – is particularly interesting because the engagement pictured is an encounter between the Texas Navy and the Mexican fleet in 1843 when Texas was an independent nation.

While only the illustrations of the pistol and the engraving immediately above it are pertinent to this brochure, the other two seem interesting enough to reproduce also. The engraving of the Navy model – which was also used by the Army – is of special interest because the engagement pictured is an encounter in 1843 between the Texas Navy and the Mexican fleet at the time when Texas was an independent nation. The illustrations are apparently a combination of three engravings used in transferring the designs to the cylinders and, therefore, the lettering on the ends shows in reverse.

The old posting song, variously known as “Who’s for the Coach Tonight,” “The Postilion,” and “Bristol Town,” was called to our attention by George L. Moore, previously mentioned, and later two slightly differing versions were found in the Boston Sunday Globe in the section entitled “Songs and Poems of Long Ago.”

The night is late, we dare not wait,
The winds begin to blow.
An’ ere we gain the hollow plain,
there’ll be a storm I trow.
An’ as we pass the Beggar’s tree,
Look out! The Dark Look out!
The phantom horseman you will see
He’ll crack his whip and shout,
Tra-la! Tra-la! Tra-la!
Who’s for the coach tonight?