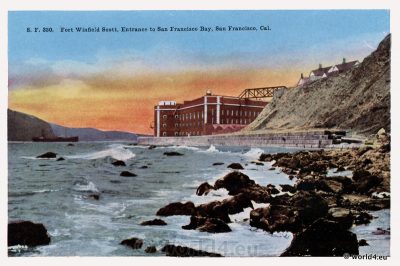 Fort Point National Historic Site is a fortification complex in San Francisco, California, at the tip of the promontory at the Golden Gate, the entrance to the Bay of San Francisco.

Since 1937, the fort has been spanned by a mighty steel frame arch at the beginning of the Golden Gate Bridge. In 1970 it was designated as a National Historic Site under the administration of the National Park Service and made accessible to visitors.

In 1776, the Spanish colonel Juan Bautista de Anza hoisted the Spanish flag on the site of today’s fort with the task of building a military fortress to protect the northernmost point of the then Vice-Kingdom of New Spain, thus laying the foundation for the settlement of San Francisco.

In 1794 the “Fort San Joaquim”, built from Adobe clay bricks and equipped with nine to thirteen cannons, was finished and served as a security post for the presidio in the neighbouring bay. At that time, the building site was located on a limestone cliff.

In 1821 Mexico gained independence from Spain and the fort was taken over by a small Mexican garrison. When it was moved to Sonoma in 1835, the clay walls of Fort San Joaquim were exposed to decay.

After the Mexican-American War, California and San Francisco fell to the United States in 1848. When gold was found that same year, the Californian gold rush began and the population of California tripled within a few months.

With the founding of the US state of California in 1850, the US Army and Navy demanded the erection of fortresses for coastal protection. The U. S. Congress approved the construction of a fort on the island of Alcatraz, Fort Mason at the foot of the growing city and Fort Point on the promontory to protect the entrance to the bay.

Between 1853 and 1861, the ruined Fort Joaquim and the cliff were blown up and today’s fort was built of brick. The walls of the fort are between 1.6 and 4 m thick, cisterns underneath the building are filled with rainwater and should also provide for a siege.

For the construction of the Golden Gate bridge between 1930 and 1937 the fort was to be demolished, but the chief engineer Joseph Strauss changed his plans and built a large arch of steel frame over the fort to preserve it as an example of the art of brick construction.