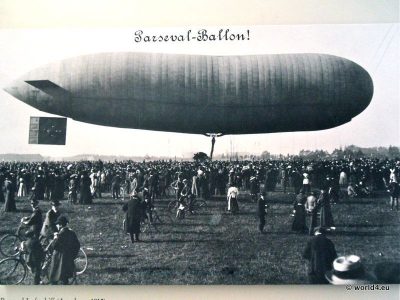 Under the name of Parseval created under August von Parseval 1909-1919 a total of 22 airships. Later, some airships were built under the designation Parseval Naatz principle. The special thing about the idea of August von Parseval was that his design no metal braces to stabilize, such as the Zeppelin needed. The ballonet (as it is called the air sac of the ship) is tightly held, by changing the temperature of the gas in it. If Increasing it, the gas expands and the balloon remains firm. On 26 May 1906 was the prototype of the Parseval airship from the military area Berlin Tegel on its maiden voyage. But it took another three years until the model was ready for series production. The Parseval airships were primarily purchased by the military, where they served as a patrol and reconnaissance ships.