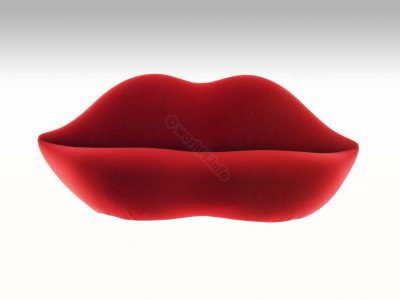 The designer Franco Audrito founded in 1965 in Turin at the age of 23 years, along with fellow designers, the studio 65th.
Inspired by Salvador Dali’s sofa, 1936, a surrealist image in which the head of the American actress Mae West took the form of a room.

The sofa was designed by Studio 65, a two-seater and has a width of just over 2 meters. Manufacturers was the Italian furniture manufacturer Gufram who also produced, in addition to other licensing scheme holders such as the furniture manufacturer Heller United States, various editions from the original design. Originally conceived as a universal piece of furniture designed for indoor as well as garden furniture, now a variety of color and material variations are available.

In addition, there is also a version with shiny chrome legs.
The difference in production is also reflected in the use of the material. The Guffram editions have been produced through the use of soft polyurethane, with a washable cover in different colors and are therefore only for the interior. The American manufacturer Heller used on plastic and synthetic polymers can be used for the outer space as furniture.

The sofa is now shown in all relevant major museums as well as the Museum of Modern Art in NYC. Studio 65 is now an internationally design and architecture firm with several branches around the globe.
Original material: molded polyethylene.

Salvador Dalli was in the media of the 60’s and 70’s as an international enfant terrible, flagship artist for a variety of commercial products everywhere. For fashion, architecture, lifestyle, Salvador Dalli was all over Blazed and through the active, irreplaceable gala also commercially very successful. It is urged that the impression of publicity rather than a serious artistic work, was at that time with him in the foreground.

Whatever his reputation as an artist in hindsight was not conducive, apart from his brilliant technical work of his early Paris days from among the Surrealists. However, this is only a superficial examination of an artist in his late phase, enriched in the modern art of his youth to some immortal work.

Together with the Spanish architect and designer Oscar Tusquets Blanca, a leading representative of the postmodern movement of the eighties led to a number of Salvador Dali designs furniture for his house in Catalonia, that he and Gala lived in Portlligat.