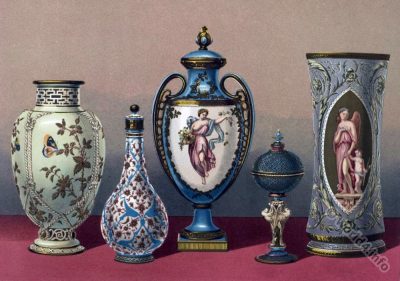 CELEBRATED as the firm of Minton & Co. has justly become for its artistic productions in Majolica, Palissy, Parian, and other earthenware, it is surpassed by none of our manufacturers in the beauty of its porcelain; from which we have selected for illustration a vase ornamented with allegorical figures of Love and Spring, by M. Jahn; an incense burner of a fine turquoise-blue, jewelled and supported by a stem formed of storks in parian on a gold ground; a turquoise-blue vase enriched with paintings representing the Seasons, also by M. Jahn; a small bottle encircled with blue and gold foliage in the Indian style; and a celadon vase from a Chinese model, with perforated neck and stem, very gracefully ornamented with foliage, butterflies, &c.

Great variety and good taste were observable in the porcelain contributed by this firm; but we were struck with a superabundance, to our minds, of Old Sèvres models (Manufacture royale de porcelaine de Sèvre). However, this is excusable when we call to mind that the old pâte tendre of that celebrated manufactory is admirably imitated by the Messrs. Minton. The production of works in pâte tendre has indeed become eminently English, and M. Arnoux, in his Report on the ceramic manufactures at the Exhibition of Paris in 1855, remarks, that though one might go to Sèvres to purchase a pair of artistically decorated vases, it is in England only that could be procured really beautiful dinner and tea services. We may here observe, that pâte tendre, or “soft” porcelain as it is called among us, made of naturally soft substances, is almost exclusively peculiar to this country. Hard porcelain, such as that of China, is very nearly a pure combination of a fine white clay (kaolin) and felspar (pe-tun-tse), whilst various other materials are mixed to form the paste of soft porcelain; amongst which bones, calcined and ground, form an important ingredient. The phosphoric acid contained in bones diffuses itself at a high temperature through all the materials and unites them in a translucid enamel, which is less apt to sink and lose its form than porcelain of hard paste. Mr. Marryat states that ” the bones are principally those of bullocks; the bones of pigs and horses being rejected, as giving a colour to the paste. Mr. Spode, in 1800, first introduced, or rather brought to perfection, the mixing bones into the paste.”

“Certain very particular amateurs,” observes M. Arnoux, “bring an objection against British porcelain, and say that as it has phosphate of lime for its basis, instead of being entirely composed of pâte frittée (Porcelaine frittée), it has no claim to be called pâte tendre. This objection appears to me to be groundless. The chief beauty of the pâte tendre consists in the complete amalgamation of the colours with the glaze, and also in its capability of receiving certain tints which cannot be applied to any other kind of porcelain; such as turquoise-blue, emerald-green, and the rose du Barry. If our porcelain combines these qualities in the highest degree, if its whiteness and transparency have been increased by the employment of phosphate of lime, who has any reason to complain? Our productions possess all the advantages of the old porcelain, and have, in addition, accessory ones; we shall, therefore, do wisely to uphold the manufacture, since it brings us nearer to perfection.”

“We entirely concur in these remarks, and would add that it is only by innovations and the introduction of fresh materials that we can expect to advance in the manufacture, if advance is possible. At present the best English porcelain is made from a mixture of Cornish and Devonshire clay, ground flints, ground Cornish stone (felspar), and calcined bones in powder, or bone-ash, besides some other materials, according to the fancy of the manufacturer. The manufacture of soft porcelain is longer and more difficult than that of hard porcelain; its biscuit or paste is dearer, although the raw materials may be easily obtained; it leaves much refuse, and requires more care in firing. With all these drawbacks, it has always been most in favour with our English manufacturers, and is fitted especially to receive the finest painting, presenting a brilliancy and unity of colour and material not obtainable in hard porcelain.

From the book: Masterpieces of industrial art & sculpture at the International exhibition, 1862. Selected and described by J.B. Waring.