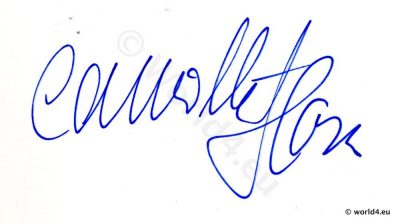 Autograph by Camilla Horn in 1980s

Martha Camilla Horn (1903-1996) was a German actress.
In the role of Gretchen in the film, Faust – a German folk tale, by Friedrich Wilhelm Murnau, she succeeded the breakthrough to international stardom. She received a contract with the United Artists in Hollywood and worked in the following period with directors such as Ernst Lubitsch and John Barrymore. Her last film appearance was in 1988 in Peter Schamonis Castle King wood, a tribute to Star actresses of the UFA period, in which Marika Rokk, Marianne Hoppe and Carola Höhn participated. In 1985, she wrote her memoirs In love with love.