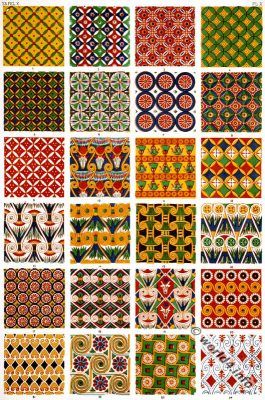 Paintings on walls of Egyptian tombs.

1-5. From Mummy-cases in the Louvre, of a late period. Geometrical arrangements of the single Lotus-leaf.
6. From a Tomb at Thebes. Each circle is formed of four Lotus flowers and four Buds, the intermediate star probably intended for four Lotus-leaves.
7. From a Tomb at Thebes.
8, 9. From a Mummy-case.
10-24 are from the Ceilings of Tombs in various parts of Egypt. In Nos. 10, 13-16, 18-23, are various examples of an ornament representing the unwinding of a pile of rope, which may have given the first suggestion of the volute. In No. 24 the continuous blue line is evidently from the same type.