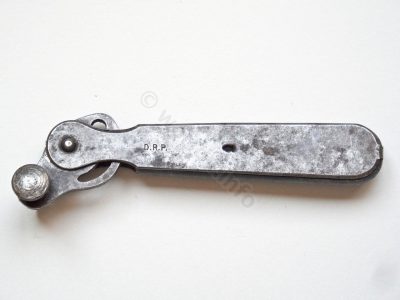 At this point, another model of a can opener of the german brand “Sieger” (Winner).
As you can see in the picture, this object has strong traces of. Originally it was painted black. The lack of color can, however, the design and operation stand out clearly. In this model, it is the original model of the “winner”. The curvature of the spine moving, still has no bottle opener but is only aimed at opening cans. It is characterized by D.R.P. (Deutsches Reich Patent). The small opening at the top is missing in order to lubricate the moving part of this. Instead, it has an opening on the handle, which will serve the same purpose, but not as a target species is placed in the later models. The handle itself is made ​​of two metal plates, is mounted in the middle of a wood panel. Difficult to see on this picture.
It does not take much imagination to visualize what story this tool carries with it. As part of the basic equipment of the soldiers of the German Wehrmacht in the 2nd World War II, one can start from a moving background. Just as it is here, it can be considered already as a contemporary historical object. The Sieger can opener is in my humble collection of everyday objects and there is a place of honor.
In later posts I’ll try the different models of the “Sieger can opener” who are now scattered in various posts.