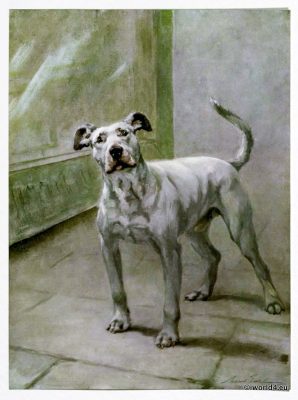 STAUNCHEST of the staunch, the BULL TERRIER will fight to the death in the service of one he loves. Although of high courage he is not necessarily a seeker after quarrels with others of his kind, but when he has entered upon one he follows the advice of Polonius, so bearing himself that the opposed may beware of him. There is a story related of a Dalmatian whose duty it was to follow his master’s carriage to the station every morning. At a certain house on the road was a surly retriever, who constantly made the unhappy creature lament that he was ever born a dog, what time his owner cursed his pusillanimity. Once day this gentleman confided his trouble to a friend who kept a bull terrier. “We will soon settle the retriever,” was the reply, and next morning the terrier, with artistic black spots dotted about his body, made the journey instead of the Dalmatian, and gave the bully such a bad quarter of an hour that for ever after he held his peace.

Fifty or more years ago, one regrets to record, the bull terrier was a very disreputable fellow, his avocation being dog fighting, badger baiting, and ratting. In the middle of last century no undergraduate of porting proclivities had completed his education until he could appraise the merits of one of these dogs. We all remember how Charles Stewart Calverley traced the metamorphosis of the Freshman, whose education grew by degrees until he:
Learned to work the wary dog-cart;
Artfully through King’s Parade;
Dress, and steer a boat, and sport with
Amaryllis in the shade:
Struck, at Brown’s, the dashing hazard;
Or (more curious sport than that)
Dropped, at Callaby’s, the terrier
Down upon the prisoned rat.

Gone are these days, “good old times,” they were called, when by some strange perversion baiting an imprisoned animal was miscalled sport. We are no less sporting to-day, but our tastes have assumed a healthier form, and it has become a wholesome law that the object of our pursuit shall have a decent chance of making good his escape.
The prejudices excited by the earlier associations of the bull terrier were not easily overcome, and it was many years before he received the entrance to decent society. Doubtless dog shows had much to do with his rehabilitation, people coming at last to recognize his sterling qualities, although the practice of cropping the ears, continued until 1895, kept him from winning his proper place in popular regard. However desirable this form of mutilation may have been in the fighting era, the suffering involved was afterwards wholly unnecessary, and the decision of the Kennel Club to put an end to it was one of the wisest things this body has ever done. The belief of the pessimists, that the bull terrier had received his death blow has not been justified by results. At first, it is true, the natural ear was an eyesore, much detracting from the smartness of appearance, but the new generation, having become accustomed to the present style, sees little of which to complain, and contents itself with the dog as he is.

Not only are classes at shows well filled, but the ordinary man, who never dreams of exhibiting, is coming to see that if he would have an ideal guard and faithful companion, not too large for the house, and yet with sufficient weight and pluck to tackle a burglar, he could not well do better than buy a bull terrier, The old dogs were of all sorts, sizes, color and types, little uniformity being observable, but now we have a shapely animal, with an air of breeding and class. Note the power and symmetry of his body, a combination of agility and gracefulness. He is as clean built as a bit of sculpture, The small eye may be a stumbling block at first, but even this, on examination, becomes a fitting complement to the shape of the head, and we would not have it otherwise.

One undoubted drawback is the tendency to deafness inherited by so many. Why the pure white dog should be subject to this defect would need an explanation of too scientific a nature to make it admissible within the cope of this chapter. It may be noted, however, as a matter of interest, that the presence of one or two dark marks on the skin, not apparent in the coat, is sufficient to maintain the hearing unimpaired. The correlation between the total absence of pigment and the non-existence of the sense of hearing has frequently stimulated the investigation of scientists. The same phenonomen is manifested in the feline race, white cats with blue eyes almost invariably being deaf. The curious thing is that if one of the eyes is of a different color the hearing is not defective. Darwin’s omission to speak of the bull terrier when writing upon this topic is not surprising, considering that the all-white dogs were not common in his time. They were a later product.