Home » Postcards » The Chutes an amusement park in San Francisco 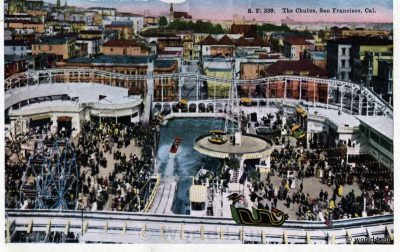 The Chutes an amusement park in San Francisco.

Chutes Park (later Horsley Park) at Fulton 1902-1907. Originally opened in 1895 on Haight Street between Cole and Clayton, it was moved in 1902 to Fulton at 10th Avenue in a stretch adjacent to Golden Gate Park, known as “Beer Town” or the “largest pleasure resort in America”