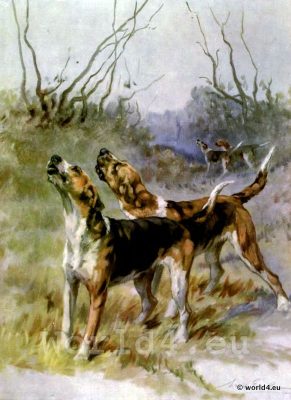 The English Foxhound is a large and 35 cm to 64-pound pack dog. This powerful and persistent dog has thick, straight hair in the colors: white, black and white or white and orange, with reddish brown markings.

On the ‘straightest legs and the roundest of feet
With ribs like a frigate his timbers to meet,
With a fashion and fling and a form so complete,
That to see him dance over the flags is a treat.

As fine a picture of the ideal foxhound as one could wish to put in print is conveyed by these word, of Whyte Melville, although the further reminder is necessary that fashion and form without nose are in vain. The handsomest hound in the world is a sorry impostor if he will not own to the line when scent is light. Fox hunting is the essence of sport. There is nothing that can equal it, looking at it all round. Big game shooting has its excitements and hair breadth adventures, pig sticking in India, and hunting the wild boar in France are recreations fit for men, but when we come to consider the innumerable qualifications necessary to make a good follower of hounds the palm must be assigned to fox hunting. In the words of the immortal Mr. Jorrocks: “Hunting is the sport of kings, the image of war without its guile, and only five-and-twenty per cent, of its danger! In that word “uniting,’ wot a ramification of knowledge is compressed!
The choice of an ‘”oss” – the treatment of him when got – the boots, the breeches, the saddle, the bridle, the ‘ound, the “untsman”, the feeder, the Fox! Oh, how that beautiful word Fox gladdens my ‘eart, and warms the declinin’ embers of my age. ‘The’oss and the ‘ound were made for each other, and natur’ threw in the Fox as a connectin’ link between the two.

No other sport unites all classes to such an extent or brings men and women together in such wholesome rivalry. Courage, skill, judgment and self-restraint are only some of the qualities brought into play.

Boys to the hunting field. Though ’tis November,
The wind’ in the south; but a word ere we start:
However excited, you’ll please to remember
That hunting’s a science and riding an art.

The fox takes precedence of all from the covert,
The hunter’s an animal purposely bred,
After the pack to be ridden, not over,
Foxhounds are not reared to be knock’d on the head.

Pastime for prince, prime sport of our nation,-
Strength to their sinew, a bloom on their cheek;
Health to the old, to the young recreation,
All for enjoyment the hunting field seek.

No excuse is needed for quoting these words of Mr. Egerton Warburton, from a poem said by the late Duke of Westminster to embody the whole code of honour and practice which it becomes a gentleman to obey in the hunting field.

That it is a costly amusement, goes without saying, especially if our Nimrod elects to hunt in one of the fashionable countries where the pace necessitates a large stud of horses, but there are still packs in existence which make more modest demands upon the purse, and perhaps show better hound work, even if fewer foxes are killed. The old trencher-fed packs, which provided sport at a minimum of expense, arc, alas, disappearing, very few now being found in any part of the country. They had the advance of interesting the farmers and small local men to an extent that is out of the question with other packs. Presumably the objections to the system were stronger than the advantages, otherwise it would not he allowed to fall into desuetude. On the one side, it may be said that hounds cared for by a number of people are less liable to suffer from diseaes which are inevitable when many are kennelled together. On the other, hounds so reared cannot possibly be kept in the sound condition desirable for a hard day’s work, and there was usually a lack of discipline in the field which was not always conducive to success.

The influence of fox hunting upon the social and economic side of rural life is one that should not be overlooked. It means that during the winter months thousands of wealthy men and women are content to reside in the country who would otherwise hibernate in towns, and the money expended upon the keep of horses runs into enormous sums. Farmers may grumble at times at the damage done, and contend that the compensation paid them is inadequate, but they get their own back with interest in other directions. What the future has in store for the sport is another’ matter. Fields may grow so unwieldily as to be a menace to agriculture; Masters may find a pack too costly a luxury with a growing taxation and increasing outlay in other directions. In fact, many considerations might be urged which may, in years to come, be sufficiently potent to overcome the glamour and enthusiasm which now surround the pursuit. Who can say?

As for the hound himself, what can be said that has not already been well said by hundreds of writers? He is the very perfection of dog flesh, beautiful to look upon in his symmetry and strength. For many generations men have brought skill and experience to bear upon the improvement of nature, for nature in herself is not necessarily perfect. She supplies us with the raw material, which we mould and fashion to suit our intent. Some think that certain points are being pushed to extremes, such, for instance, as the craze for straight fronts. True, in a hound we want great bone carried well down to the feet, but it is not an uncommon thing to see the forelegs knuckling over In a manner which is dangerously near unsoundness.