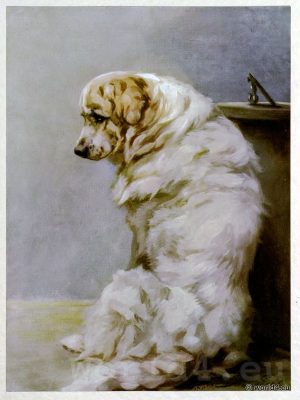 Seated by my side,
At my feet,
So he breathed but air
I breached, Satisfied!
Browning

AS the heavy train steamed into Willesden sounds of barking directed me to the compartment in which the pup was traveling. This, the first excursion from the kennels in which she had passed the three and a half months of her young life, was an event co be signalized by signs of disapproval. Strange voices, stranger modes of locomotion, were disturbing and disconcerting, and my friendly accents but quieted her momentarily. The protest was renewed as we proceeded by another train to the home that was soon to be friendly and familiar. As for us we were anxious to see the small creature with such expressive vocal organs. When the hamper was opened the most delightful little Teddy Bear imaginable bounded out and proceeded to introduce herself. A mass of white fluffy down, with here and there a splash of lemon, eloquent dark eyes, and plump as the proverbial partridge.
That was PANDORE as we first knew her. Time only served to strengthen and crystallize the early impressions. With manners as charming and irreproachable as her looks, before many days had passed he had won all hearts, becoming an important member of the household. That wise head of hers held brains which led her instinctively to adapt herself to her surroundings, and fall in with the habits and wishes of the human gods who formed her little world. Visitors, though tolerated as necessary evils, were regarded with signal disapproval, heavy bark and bared teeth warning that no evil intent must be harboured towards the inmates of the house.

As Pandore grew older the downy coat was shed, profuse long hair taking its place in gradual transition, and she became more and more intelligent, until we agreed that we had never, among our host of canine friends, met one so sensible. None, too, could be more expressive. When on mischief bent she displayed it with a roguishness of demeanour that earned absolution for the misdeed almost before it was perpetrated. Greatly did she delight in a game of “catch as catch can” on the lawn with the children. Entering into the spirit of the fun she would romp round in endless gyrations, bushy tail extended to the full a few inches from hands ready to grasp, but she could calculate to a fraction, twisting and dodging with the art of a football player, until pity impelled her to pretend she could go on no longer. One could fill a book relating Pandore’s escapade, but further recital might weary. Let mention of her adventure with the garden hose suffice as an example of the rest. The curious serpentine length stretched out on the lawn interested her vastly, and when she heard the sissling noise made by the air escaping from the nozzle as the water came on down went her nose to investigate. A sadden jet full in the face caused a precipitate retreat, and now as the hose appears there is much commotion at a diplomatic distance.

These few words convey but inadequately the intelligence and charm of the Pyrenean Mountain dogs which Lady Sybil Grant is doing her best to acclimatize in this country. More delightful companions and trustworthy guardians could not be wished by the most exigent, nor is this surprising. For centuries they have lived in communion with their masters on the Pyrenean slopes, protecting the flocks from bears and wolves, or human depredators. With the practical disappearance of the former animals their vocation to an extent has gone, while the inherited instinct remains. They are no common sheep dogs, used to round up the Rocks. In their native land, the shepherd, following the old Biblical custom, leads his sheep to the green pastures on the mountains with the advent of spring, and there they remain until winter approaches. Time was when severe toll would have been taken of the defence less creatures during the long nights hut for the unceasing watchfulness of the faithful Patous posted at various points.