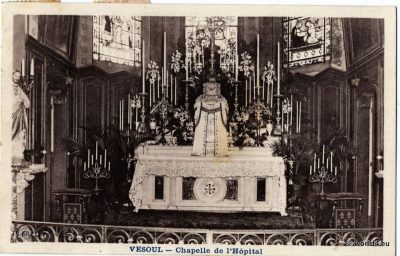 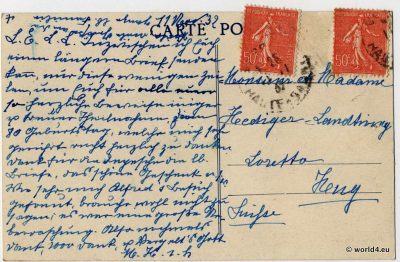 The Paul-Morel Hospital is a former hospital located in Vesoul, which was in operation from 1938 to 2009. The hospital is named after Paul Morel, mayor of Vesoul from 1908 to 1933.

Originally built as a convent, the building had undergone numerous renovations to be successively converted into a begging depot, infantry barracks, a secondary ecclesiastical school and diocesan seminary.

The origin of the building dates back to the early 17th century. In 1603, Claude Besançenot founded the convent of the Capuchins (now Paul-Morel hospital) at Faubourg Haut (now Baron-Bouvier street).

At that time, the hospital was located in the town hall buildings of Vesoul. The convent was later enlarged in 1627. A chapel was built in 1682, and mass was celebrated there a year later.

The old hospital is a large 2-storey building. It is notably made up of a courtyard surrounded by arcades and a chapel. It is also equipped with a pointed grille and a high entrance door.

The postcard shows the altar of the Chapel Hospital 1932.
Send to Zug in Switzerland. On the back, handwriting, old French stamps and postmarks.