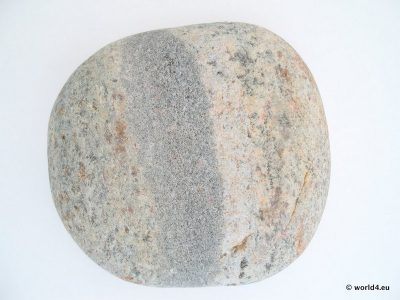 River stone from the area of ​​Lam near the mountain Osser*. The wide wood areas belongs to Bohemia, however, referred to on this side of the border as the Bavarian Forest. It is a very popular holiday destination and famous for its scenic beauty. Until a few decades ago, it was among one of the most underdeveloped regions of Europe. Famous the glass produced in this area is. Many ancient myths tell of the hardships and supernatural events in this formerly very wild area. Books have been written about the Golden Path. It is an ancient mule track over the mountains that led from Bavaria to Bohemia and on the trade goods were transported. Geologically it is one of the oldest mountain range in the world. Here the loop is closed because the stone was lying in a crystal clear and icy cold forest stream over the remnants of the led. Hidden deep in the forest and only for local knowledge available.

* The Osser (Czech: Ostry) is a mountain on the border between Germany and the Czech Republic, located in the Bavarian Forest and the Bohemian Forest and belonging to the Kuenischen Mountains. The Czechs call the Osser also affectionately known as the “breasts of the Mother of God”. Of the natives of the house Mountain Lam is often called the “Matterhorn of the Bavarian Forest.” A distinction is made between the directly located on the border Great Osser (1293 m) (Velky Ostry) and the west of it all situated in Bavaria little Osser (1266 m) (Maly Ostry). Both peaks are due to their pointed shape as unique in the Bavarian Forest. They shape the backdrop of the Lamer angle which is formed by the towns of Arrach, Lam and Lohberg. The Osser is located in the district of Cham, and thus in the district of Upper Palatinate. From the summit cross, you have a wide view to the Czech Republic on the Bohemian Forest, the nearby Arber and on clear days even to the Alps. In the 12th Century was built on the summit of the Osserburg Ossers, which is now completely destroyed. To the Osser entwine several fairy tales and legends.