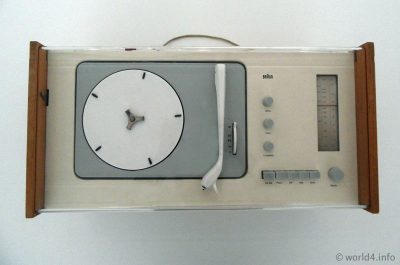 The Braun SK 4 or “Phonosuper SK 4” is a radio-phonograph combination which was presented in 1956 by the company Braun. It consists of a tube radio and a record player in a sealed enclosure made ​​of metal and wood with acrylic glass cover. A special feature of the “Phono Supers SK 4” is the solid plexiglass cover, which was a novelty for products of consumer electronics at the time. Originally, Hans Gugelot and Dieter Rams provided a cover made ​​of sheet metal, but it turned out that this would rattle at higher volumes. Dieter Rams suggested as a solution to a cover made of acrylic glass in front, a material that had just appeared on the market. The clear cover had a formative for decades and brought the device, the colloquial name “Snow White’s Coffin”.