Home/Ancient, Decoration, Ornament/Egyptian decorations and motifs on tombs and dresses.
Previous Next 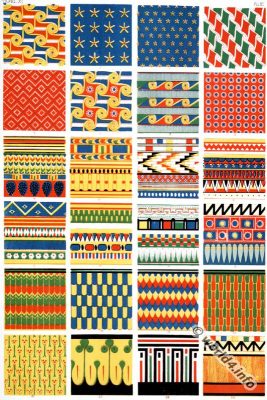 1, 4, 6, 7, are from Tombs at Thebes, and are further examples of the Rope Ornament given in the last Plate. Nos. 2 and 3 are varieties of arrangements of Stars, very common on the ceilings both of tombs and temples. No. 2 is formed on squares, No. 3 on equilateral triangles.
9. From a Mummy case.
10. From the Embroidery on a King’s Robe.
11-16 are varieties of Borders from Paintings in Tombs.
17. From the Dress of a Figure in one of the Royal Tombs of Biban el Moluk. It represents the Scales of the Armour worn by the Heroes and Gods of Egypt.
18-20 are similar, and most probably were suggested by the feathers of birds.
21. Ornament on the Dress of the god Amun, from Aboosimbel.
22. From a Fragment in the Louvre.
23. Dado from the Tomb of Ramses, Biban el Moluk, probably representing, in diagram, a Papyrus-grove, as it occupies a similar position to those dados of a later period which were formed of buds and flowers of the papyrus.
24. From a very ancient Tomb at Giza, opened by Dr. Lepsius. The upper part represents the usual Egyptian torus; the lower portion is from the dado of the same tomb, and shows that the practice of imitating grained woods in painting is of the highest antiquity.