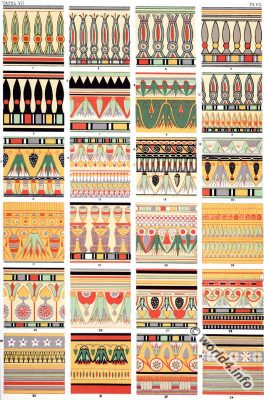 Nos. 1-5, 10, 11, always occur on vertical surfaces, and on the upper part of the walls of tombs and temples Nos. 7-9, 12, 14, 18, 20, are all derived from the same elements, viz. the lotus in a pendent position, with a bunch of grapes intervening. Tins very constant Egyptian ornament in some of its forms so much resembles the Greek moulding, usually termed the egg-and-tongue, or egg-and-dart moulding, that we can hardly doubt that the Greek moulding was derived from this source. Nos. 1 3, 15, 24, 32, exhibit another element of Egyptian ornamentation derived from the separated leaves of the Lotus.