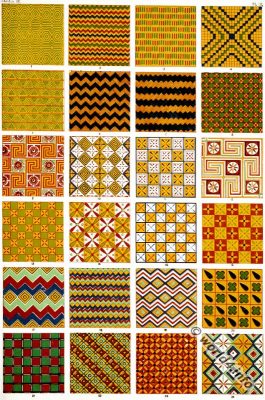 The Ornaments on this Plate are taken from Paintings on Tombs in various parts of Egypt, from original Drawings. They are chiefly patterns that could be produced by the loom, and a single glance will show that this is doubtless the origin of most of them.

1-8 are representations of Mats on which the kings stand. They were evidently formed of interwoven straws of different colours. The transition from this state to the formation of patterns, such as 9-12, 17-19, 21, would be very rapid, and they are most probably only reproductions of woven articles of daily use.
Nos. 9 and 10 may have suggested the fret to the Greeks, unless they arrived at it themselves by a similar process.
20 is from the Ceiling of a Tomb at Gourna. It represents the Trelliswork of a Garden Walk, covered with a Vine. It is by no means an uncommon ornament for the curved ceilings of small tombs, and usually occupies the whole ceiling of each excavation at the period of the nineteenth dynasty.
21-23 are derived from Mummy cases in the Louvre, of a late period.