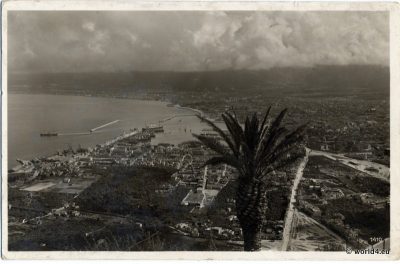 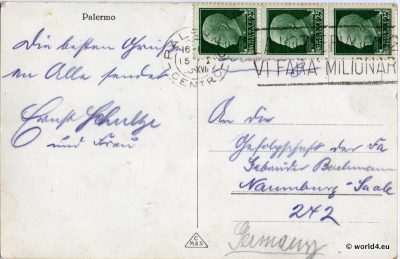 Palermo Sicily Back of Postcard.

The postcard, card postal shows a panorama of Palermo in Sicily. In the 8th Century BC, founded the city experienced primarily under the domination of the Arabs and the Normans and the Hohenstaufen heyday. Emperor Frederick II expanded the city to the glorious residence and founded the Sicilian School of Poetry.
Today, Palermo, Italy’s fifth-largest city and the political and cultural center in Sicily. The city lies on a bay of the Tyrrhenian Sea on the north coast of Sicily.
In the background of the postcard the harbor can be seen. The postcard was sent in 1920 to Naumburg an der Saale in Germany. The back is described by hand and validated with 3 italy stamps.