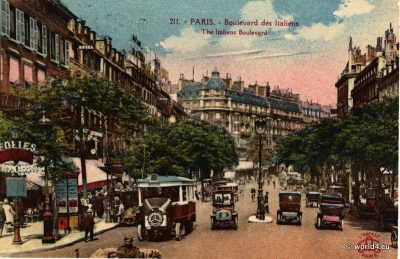 The 390-metre-long boulevard of Italy is located in the 2nd and 9th arrondissement of Paris and is one of the 4 grands boulevards of the Rive Droite.

According to the king’s decree of June 21st 1704 it was allowed to be converted into a road. His first name was rue Neuve-Saint-Augustin and he then changed his street name frequently. 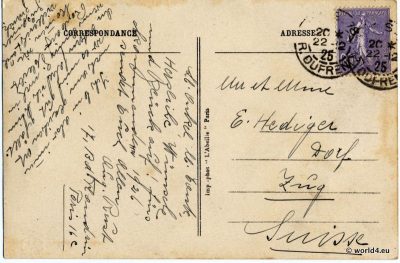 In 1828 it received its present name from the former “Théâtre Italia de Paris”, founded in 1793, today’s Opéra-Comique, which is located in nearby Place Boieldieu. A royal decree of 16 April 1831 provided for the final road layout and a road width of 35 metres.

Back of Postcard, Paris, Boulevard des Italiens with two nice postmarks, old stamp and handwriting. The postcard was sent to Zug in Switzerland