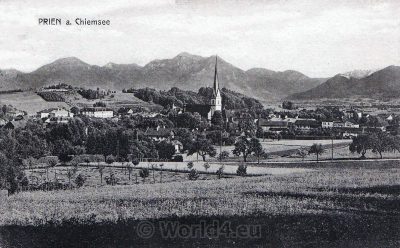 In the background are the mountains of the Bavarian Alps. In the foreground, the village Prien with church and old architecture. Prien was in the middle of the 12th century (around 1158), established as an administrative center of the Counts of Falkenstein. Prien am Chiemsee was in the course of administrative reform in Bavaria in 1818 an independent political community. The health resort and spa resort is located directly on Lake Chiemsee. The name Prien derives from the Celtic name for the river Prien (Brigenna – “The coming out of the mountains”) from.