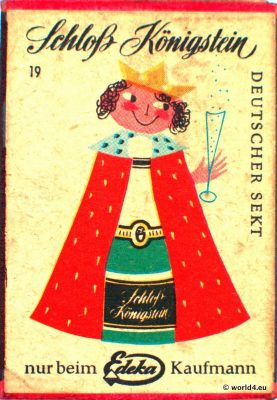 German Grafidesign from the 60s. Advertising on matchbox. Castle Königstein, German sparkling wine, only the Edeka merchant.
Owner of the Edeka Group are co-operatives, in which independent retailers have joined forces. Regional companies are responsible for the wholesale business, supplying the independent traders such as the branch offices. The Edeka Group was formed in 1898, when 21 shopping associations  from the German Reich in Berlin for “purchasing cooperative of the grocer in the Halle Gate district of Berlin” – short d E. K. – merged.